Sacrifice – A Single Word That Makes the World a Better Place

Many times when we talk about sacrifice, what we are really talking about is self-denial. We tend to speak of the things that we personally give up in order to achieve a goal. You know, like when we say, “I sacrificed my weekends to work extra hours so I could earn additional money for last summer’s vacation;” or, “I am going to sacrifice eating sweets each day so that I can lose a few extra pounds before Christmas this year!” This is certainly one meaning of the word, but there is a greater kind of sacrifice which can ultimately be much more rewarding, and which benefits not just ourselves but others, as well.

This reminds me of the story of Arthur Ashe. Many of you will remember Arthur Ashe, and most likely remember him as the great tennis player who won three Grand Slam titles, and who was the only black man ever to win the singles title at Wimbledon. You are right, he was a great tennis player, but he was also a great man – a humble, giving man who achieved so much in his short life, both inside and outside the world of tennis, before it was tragically cut short. However, when we remember Arthur Ashe we mustn’t forget his brother Johnnie, a man who knew what it meant to sacrifice for others, and in doing so, played an important part in helping Arthur achieve all that he was able to achieve in his 49 remarkable years on this earth. 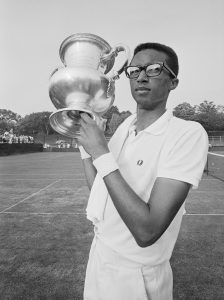 Arthur had been awarded a tennis scholarship from UCLA, and in addition to playing tennis for the Bruins, he was an active member of ROTC, which required him to join active military service after graduation in exchange for money for tuition. Hence, Arthur joined the United States Army on August 4, 1966. After finishing his basic training, he was commissioned as a second lieutenant, and was assigned to the United States Military Academy at West Point where he worked as a data processor. You have to remember, the war in Vietnam was in full swing at this time, and in the spring of 1967, Arthur, an Army second lieutenant, was honing his tennis skills as an accomplished amateur player, eyeing a shot to compete in a Grand Slam championship.

A world away in Vietnam, at Red Beach Base Area in Danang, his younger brother, Johnnie Ashe, a Marine, anxiously counted down the days left of his time at war, chomping at the bit to get back home. That’s when it hit Johnnie, now 70. He described it as a “God thought.” The young Marine realized if he went home, his older brother, who had 15 months left in the service, most likely would be shipped off to Vietnam. Johnnie immediately marched down to his first sergeant and requested a second tour of duty.

“I didn’t want Arthur to have to experience Vietnam. He didn’t need to experience Vietnam,” said Johnnie. Johnnie knew that there was an unofficial military policy meant to spare family members from serving in battle at the same time (remember the movie Saving Private Ryan). “Arthur didn’t need to be in Vietnam — if for no other reason than where’s he going to practice? It would just upset his body of motion and the progress he was making in the sport.” 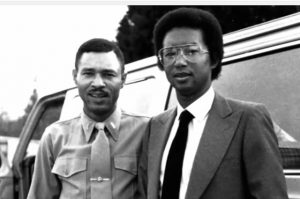 The Marine Corps granted Johnnie Ashe his unusual request, and while he spent the next year fighting in Vietnam with the 1st Force Service Regiment and the 3rd Marine Amphibious Force, his brother served safely at the U.S. Military Academy at West Point and prepared for the 1968 U.S. Open. Johnnie made it back to the U.S. just in time to see his brother beat Tom Okker in five sets to claim his first U.S. Open, becoming the first black man to win a Grand Slam tournament.

Five years Arthur’s junior, Johnnie knew from a young age his brother was destined for greatness. More than a star on the tennis court, Johnnie recalled recognizing his brother’s intellect and commitment to righting injustices even as a teenager in their segregated hometown of Richmond, Va. “There was more to Arthur Ashe Jr. than just tennis,” Johnnie Ashe said. “The world didn’t know it at that time, but I, as his brother, I knew it.”

Johnnie went on to serve 20 years in the Marine Corps, retiring as a captain. Arthur excelled on the tennis courts. He won two more Grand Slam championships — the 1970 Australian Open and Wimbledon in 1975. Off the court, he raised awareness of many issues, such as health care and educational deficiencies in minority American communities and later about AIDS, the disease that would take his life in 1993 after he contracted HIV from a blood transfusion after heart bypass surgery. 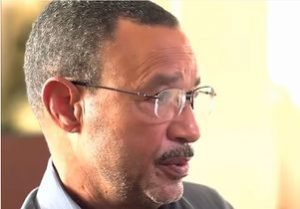 Johnnie never told his brother of his decision to volunteer for a second tour in Vietnam. He said there was no reason to do so. “It was a really simple decision,” he said. “It worked out.”

However, Johnnie learned after his brother’s death that Arthur was aware of his sacrifice, when he included it in his book “Days of Grace: A Memoir.”

That sacrifice has not gone unnoticed. USTA spokeswoman Jasmine Sheppard said it was important the U.S. Open recognize Johnnie Ashe alongside Arthur Ashe. “We want to be make sure we acknowledge him for his sacrifice,” Sheppard said. “This is about both of the brothers, for what was accomplished both in tennis and outside the tennis realm. We want to celebrate them.”

Fifty years later, Johnnie Ashe said he would again make the same decision that most likely spared his brother from war. “He justified what I did,” Ashe said. “He was able to stay out of Vietnam and play and practice and get better, and because of his successes in tennis, it put him in a position to assume the burdens of others… and because he was a champion, because he was great, people listened.”

While not every sacrifice we make will become the stuff of legend, it’s still important to remember to that when we give of ourselves, we often enable someone else to give of themselves to others. Maybe it’s something as simple as deciding to skip that favorite television program each evening so that we can spend times with our spouse or our kids. Someday those kids will remember the quality time that they spent with mom and/or dad, and they will in turn give of themselves to their children, and so on. Every little sacrifice has the potential to make us better people, and make the world a better place!

Inspired by the story by Corey Dickstein published in Stars and Stripes on August 31, 2018