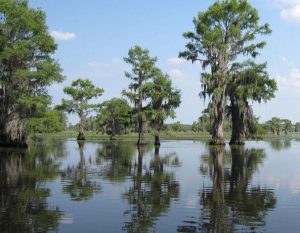 Have you ever been to visit Caddo Lake in East Texas? If not, you simply must place it on your short list of places to visit within the great state of Texas. Caddo Lake is described as “a magical place, a mix of open water interspersed with stands of cypress trees draped with Spanish moss, narrow channels through flooded cypress forest that open into fairyland-like patches of open water covered with aquatic plants.” I can attest firsthand to the fact that the lake is stunningly beautiful, and more importantly, to the fact that Caddo Lake literally has the highest diversity of fish life of any Texas lake. It should come as no surprise then, that Caddo Lake produces excellent fishing!

Caddo Lake is often referred to as “the only natural lake in Texas,” but this isn’t exactly true. In fact, Caddo Lake used to be a natural lake, but now it’s a reservoir, like most of the other lakes in Texas. How, might you ask, could Caddo Lake have been a natural lake at one time, and now exist as a reservoir? Well, it’s a very interesting story, and starts with the story of the Great Raft.

The Great Raft was an unimaginably massive log jam on the Red River in present day Louisiana. It was so large, that it stretched more than 160 miles long at its peak in the early 1830’s. As you can imagine, a log jam that large doesn’t form overnight. In addition to being incredibly large, it was also incredibly old. Most experts agree that the log jam began forming somewhere around 1,100 to 1,200 BC, and was formed by fallen trees and other debris. It was first encountered by Europeans in the late 1700’s, who gave it its name.

The Great Raft formed a natural dam, backing up water behind it. Water from a swelled Big Cypress Bayou, drained into the Red River, and in turn spilled into the low, swampy basin and created Caddo Lake, which covered as much as 30,000 acres. Caddo Lake existed in this form, as a wholly natural lake, until 1873, when the last of the Great Raft was removed.

With the natural dam now removed from the Red River, the water in Caddo Lake emptied, leaving the area swampy and unable to be navigated by boats or other vehicles. It remained that way until the early 1900’s, when oil was discovered in the swamp that was once Caddo Lake. The swampy terrain made it next to impossible to get drilling equipment into the area. The solution was to re-flood the swamp, making it possible to use barges to float equipment to drill oil wells at locations in the swamp.

In 1914, an earthen dam was built near Mooringsport on the Louisiana side of what had been Caddo Lake, re-flooding the swamp and creating the Caddo Lake of today. Today’s lake covers 25,000 acres, and is much smaller than the original lake created by the Great Raft, but it’s still a treasure, and one which we have today thanks to the oil industry. Who says that oil exploration will destroy the environment? When people make this statement, tell them about Caddo Lake and its rich biodiversity. Better, yet, pack you bag the next free weekend, and take the drive over to Caddo Lake and get lost in its natural beauty!